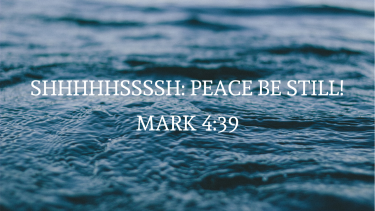 When you turn on the news channels or read the newspapers, one theme seems to be prevalent; and that is chaos and a lack of peace. In the UK, if it is not Brexit, then it is knife stabbings. In the US, if it is not the government shutdown, then it is the Democrats versus the Republicans or those obsessed with Trump. In Nigeria, if it is not the government and judiciary battle, then it is Boko Haram and corruption or the Apapa gridlock. Bombings of the Church in the Philippines, the Brazil dam incident, footballers plane missing; as if it is not enough, children and young adults misbehaving, then the Church (we the people of God) get into the fray with one story or the other, and the list goes on. I certainly don’t know what is brewing or causing a storm in your life or home and business, but this advice I have for you, command the storm to “Shhhhhsssh: Peace be still.”

Well you say, it is not that simple; I hear you and I am not in any way attempting to trivialize the issue, however, the Bible says this, “To this, you were called, because Christ suffered for you, leaving you an example, that you should follow in His steps.” Read 1 Peter 2:21 (NIV). So, what Jesus did, you and I have been authorised to exercise the same authority He exercised. Listen to the key text, “And He got up and [sternly] rebuked the wind and said to the sea, “Hush, be still (muzzled)!” And the wind died down [as if it had grown weary] and there was [at once] a great calm [a perfect peacefulness].” Read Mark 4:39 (AMP). Following in His steps is doing what Jesus did in the midst of a situation – He told the storms to HUSH and BE STILL.

Watch this, Jesus spoke to things, and it is not beyond you and me to speak to things for them to obey the voice of faith-filled words. Jesus spoke to the fig tree, He spoke to the wind, calmed the storms, but most importantly, He spoke the Word and used it to address the issues of His day and time. Recall the Bible verse, “As He is, so are we in this life.” Jesus also said, “I assure you and most solemnly say to you, anyone who believes in Me [as Savior] will also do the things that I do, and he will do even greater things than these [in extent and outreach] because I am going to the Father.” Read John 14:12 (AMP).

Beloved, God is no respecter of persons, He is only a respecter of His Word. Therefore, when you declare God’s Word over a storm which rises as a situation, that thing has no option but to yield and hearken unto the voice of your words. Watch this and are you aware, everything God created has intelligence? And the things He created obey the command of God’s Word.

Father, thank You for peace and joy reigns in my spirit soul and body. Lord, thank You for you are daily watching over me, and for that, I am eternally grateful.

One thought on “Shhhhhssssh: Peace be still – Part 1”